IT band injuries, What do you need to know about it ?Anatomical considerations, treatment options and home exercise program.

Here is an illustration of the anatomy of the IT band. The IT band is an important structure that gives stability to hip and knee. The main muscle attachments to the IT band are the gluteus maximus and the tensor fascia late. The main action of the IT band is to prevent adduction and internal rotation of the femur during mid stance phase of gait. It is believed in the female athletes with IT band friction syndrome or IT band tightness there is weakness in the hip abductors especially the gluteus medius causing excessive knee adduction and internal rotation. There is also ipsilateral trunk flexion. The below stickman illustration demonstrates the forces on the knee. 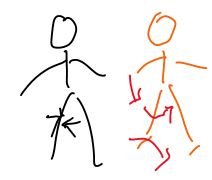 Here is a stick man illustration showing 1. Where all the forces are balanced and the Orangeman where weakness in the core and hip causes IT band forces to go unopposed with excessive thigh bone adduction, the femur turns inwards and the foot pronates. This causes significant stresses in the knee and foot structures. The leg loses its normal recoil mechanism while walking and running. The excessive stress placed causes pain in the lateral knee, foot and hip.

IT band friction syndrome is the second most common running injury after patellofemoral pain in runners. It accounts almost to 30-45% of all running related knee pain. That’s almost one in three runners will experience lateral knee pain. The real question right now, can it be prevented?

IT band friction syndrome is reported as a overuse injury by some studies, so care should be taken when increasing exercise intensity especially while considering mileage, hill training and speed work. Other factors to consider in injury prevention is knee angle in downhill running, wearing old shoes, running on the same side of a cambered track, leg length discrepancy, excess foot pronation, weakness of the gluteus medius muscles. There are some suggestions that some combination of the above factors when it reaches a certain threshold can cause pain. In my practice fatigue while running can lead to poor biomechanics causing an overload injury to the area.

Assessment of a tight IT band

The Ober’s test, which is a test for IT band flexibility is a performed with the examiner standing behind the side-lying patient. The examiner stabilizes the pelvis with one hand, ﬂexes the uppermost thigh, and then moves it into maximal abduction. He or she then maintains the abduction while moving the thigh into extension. The examiner then lowers the limb into adduction until it stops, or until the pelvis starts to tilt. The angle of hip joint adduction (or abduction, if the thigh cannot adduct even to neutral) is considered to be a measurement of ITB length or distensibility. The only problem is there is poor clinical correlation with ober’s test with IT band friction syndrome. The ober’s test can be limited by poor hip flexibility and other factors.

Functional assessment of the knee

The functional assessment of the knee is a better alternative to flexibility testing. As it looks at lower limb functionality as it related to movement. It is a better predictor of injury as opposed to isolated testing. The tests that are frequently performed by the orthopedic physiotherapists at Revive are 1. Functional movement screen, 2. Selective functional movement screen,3. Applied functional sciences. All these tests are pretty easy to perform in a clinical setting and the patients can be quickly screened for movement dysfunctions that could possibly lead or contributing to an injury. These tests are not isolated tests and has some functional meaning for the therapist and the patient. Its also easy to retest so improvements can be tracked.

Is a tender IT band bad?

Is IT band stretching useful?

Its hard to get a good stretch of the IT band. But a stretching program that consists of stretching the hip and knee complex and IT band would be useful for injury prevention.

Regular strengthening program for the hip abductors and extensors is highly recommended to prevent running related IT band friction syndrome.

Revive physiotherapists use a number of different treatments to tackle knee pain depending on how acute or chronic the problem is. The most likely treatment would be a combination of dryneedling and radial shock wave therapy for the hip and knee complex, fabrication of custom orthotics if its indicated and comprehensive exercise program to address all the biomechanical/ intrinsic factors that could be causing the pain.